Cheers! To JOMBA! and to Marcus White

It was twelve noon on Sunday, Sept. 6.

The Zoom room slowly came to life as participants from the three continent dance writing residency entered to bid adieu, sharing highlights from the 2020 JOMBA! Contemporary Dance Experience. We cheered with adult beverages (although it may have been a bit early for some of us to be drinking). We passed the time with humor but the gathering was about dance. We nattered about our relationships to the moving art form, noting that our associations were authenticated by our adaptability. COVID-19 compelled us to access that adaptability. And as the 2020 JOMBA! Contemporary Dance Experience went digital, a reimagining happened, all while never traveling to South Africa to experience the dance stories of Gregory Maqoma (Johannesburg, South Africa), Germaine Acogny (Senegal) and Adedayo Liadi (Lagos, Nigeria).

We talked about dance having a pulse, and how that pulse stirred us, and how from Aug. 25 until Sept. 6 we watched, sitting in appreciation of each choreographer’s vision and every dancers’ triumph. We spoke in admiration of the festival's curation, direction, production, facilitation, and the writing, unknowingly becoming acquainted with each contributor’s zeal.

Nothing could prepare us for the beauty, the power and the indulgence the festival provided. It offered well-seasoned food…nothing bland. It's overwhelming initially, but then you realize JOMBA! is like a party for your senses; you have a choice of how much to consume, and when.

This year the festival proffered seven platforms ranging from works by recognizable global dance artists to works produced as reactions to COVID-19. A digital photographic exhibition was also a part of the line-up for JOMBA! 2020 and so was programming designed specifically for art created in isolation. Lauren Warnecke, senior writer and editor at See Chicago Dance, was one of the curators for the USA Dance on Screen platform and spoke on behalf of the curatorial team (Tara Aisha Willis, Peter Chu and Rachel Miller) saying their aim was to illustrate some of the pressing topics in America today. Warnecke disclosed the importance of representing a wide swath of American culture through various geographic, cultural, racial economic and socio-political perspectives. The platform served as a form of inquiry, examining and unpacking narratives while urging viewers to attach their own experiences in connection to time, themes and location. While the 10 pieces offered ranged from interpretive to narrative, each film affirmed reality to be a social construct, reminding us that dance can be interpreted through multiple lens. Yes, multiple meanings matter.

A standout in the USA Dance for Screen—and for personal reasons—was “subMERGE a dance scene for camera.” Choreographed by Marcus White and Ana Maria Alvarez, the film illustrated the complexity of social life while illuminating a range of visual designs in its composition. The digital JOMBA! brochure explained that “subMERGE” was set on Wilshire Boulevard in Los Angeles, California. “subMERGE” displayed a community of dancers weaving in and out of vignettes as plastic bottles acted as a barrier between the moving storyteller and the screen. Hanging yellow strings reminded me of drying pasta, dangled like micro-mini carwash wipers, texturizing the scene for each cast member. The village of movers vogued and breakdanced, articulating their limbs as if conducting their own orchestras. When their arm-initiated choreography wasn’t staccato, sinuous body waves were created, forcing each dancer into each other. Composer and interdisciplinary artist d. Sabela Grimes orchestrated an applicable musical homage to these social movers. Metrical chants of “wade in the water” tempered the physical landscape, offering hopeful liberation. White and Alvarez created a world in which you didn’t have to cope—simply bask.

Watching the film reminded me of the last time I spoke with White. He messaged me on Facebook, asking my availability to vent about academic qualms. We later chatted for an hour, committing to do better at staying in touch. We never kept that promise, but his work at JOMBA! stood in his place and we conversed. Marcus, may your dancing soul rest in peace.

Clare Craighead, lecturer in Drama Studies at Durban University of Technology, co-hosted the JOMBA! Khuluma writing residency, which was another platform for the festival. The blog and digital magazine served as the library where documentation of the festival was archived and over 50 writers from South Africa, the United Kingdom and the United States wrote about dance, translating choreographic insight and effectively connecting their viewing experiences to their personal lives. We scribe, attempting to answer the question, “What do U see when I watch dance?” Collectively we saw stories, colors, moving shapes and relationships. We saw music. We also saw creativity born out of a pandemic, inviting the veracity that the only real failure of this festival was never having explored this virtual platform in the past.

Thank you JOMBA! for a festival filled with digital dance and deca(dance). 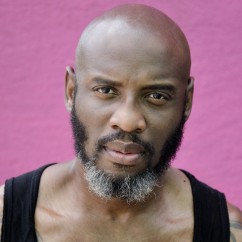 Fellow Gregory King is a culturally-responsive educator, performance artist, activist and movement maker who received his MFA in choreographic practice and theory from Southern Methodist University, and is certified in Elementary Labanotation from the Dance Notation Bureau. His dance training began at the Washington Ballet and continued at American University and Dance Theatre of Harlem. He has participated in the Horton Project in conjunction with the Library of Congress and has performed with Rebecca Kelly Ballet, The Washington Ballet, Erick Hawkins Dance Company, New York Theatre Ballet, Donald Byrd /The Group, The Metropolitan Opera Ballet, New York City Opera and Disney’s ​The Lion King​ on Broadway.

He has taught master classes, lectures, and workshops nationally and internationally. He has served as dance faculty for Texas Ballet Theatre and Boston Ballet, as well as visiting assistant professor of dance at Temple University and Swarthmore College.

King is a dance writer for The Dance Enthusiast, ThINKingDANCE, ​The Philadelphia Dance Journal​, CHOICE Review and ​Broad Street Review​. Recently, Mr. King’s response to the Dancing for Justice Philadelphia event and was cited in the U. S. Department of Arts and Culture’s new resource guide, “Art Became the Oxygen.”

In addition to having served on the dance review board for the National Endowment for the Arts, King was nominated for a Governor’s Award for the Arts in Ohio and was recently appointed to the Board of OhioDance. He was the 2018 recipient of the Outstanding Creative Contribution award from the Division of Diversity, Equity and Inclusion at Kent State University and served as Provost Faculty Associate for the academic year 2019-2020. Mr. King is a tenure track professor of dance at Kent State where he serves as the artistic director of the Kent Dance Ensemble. www.gregoryaking.com