Freezing the sun won't keep it from setting—Robyn Orlin's peculiar romp a remark on history, memory and nature

A South African sunrise, reflecting iridescent swatches of light, flirts with a fluttering silk backdrop. Bleeding watercolor rainbows penetrate a translucent fabric hung from above the stage highlights clucking chickens projected on the feather-like backdrop. Moving into Dance Mophatong dancer SunnyBoy Matau oscillates and pecks as a bird-man, draped in a multi-purpose white dress made of dangling white t-shirts, which occasionally reincarnates itself in between banjo melodies as a gele, a baby swaddle and a fabulous accessory. Each object on the dimly lit stage is striking enough to stand alone but electrifying when dancing in tandem.

“Beauty remained for a moment and then returned gently to her starting position” is the peculiar title of South African choreographer Robyn Orlin’s ambitious 2012 work for the Johannesbrug-based company, presented Thursday as part of the JOMBA! Contemporary Dance Experience. A moving conversation piece, “Beauty” audaciously sheds light on many of the concerns laid bare in post-apartheid South Africa, serving as a microcosm for the rest of the world. Orlin, infamous for her provocation, stays true to form as her script is recited by authoritative Julia Burnham, who wears black lingerie and strips t-shirts off the backs of random men in the audience in order to create a handmade tutu and fulfill her promise as the “tutu goddess”. She later has the audacity to auction the t-shirts back to her victims. Symbolic of colonial looting, Orlin brilliantly reminds her French audience—this JOMBA! livestream is of a previously recorded performance in Europe—of their violent history, with a smile.

Orlin is brilliant and slick. With a cast of seven witty movers, each one fully embraces their character and speaks a movement language true to their native tongue with vigor and unbridled joy. I found beauty in the oneness of a breathing set of bodies, wearable sculptures, invigorating lighting and soulful sound. Elements of surprise and active participation of the cast fold the audience into this fluid environment that makes so separation between the watcher and the dancers. In “Beauty remained for a moment and then returned gently to her starting point” we are reminded that every molecule has a pulse. Perhaps that’s where we find the true beauty in the respect for life, leaving nature as she is: free and revolving. 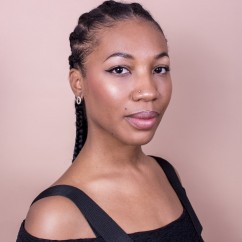 For the past 15 years, fellow D’onminique Boyd has contributed to the field of dance in varying roles as a performer, educator, healer, community member and arts administrator. Most notably, she danced professionally with Kotchegna Ivory Coast Company, the Howard University Marching Band, studied with the Urban Bush Women in the Summer Leadership Institute, appeared in the movie Step Up and worked as a dance facilitator at El Puente Academy of Peace and Justice.