“My music is the spiritual expression of what I am — my faith, my knowledge, my being...When you begin to see the possibilities of music, you desire to do something really good for people, to help humanity free itself from its hangups...I want to speak to their souls.”

The philosophy of bebop saxophone titan John Coltrane is at the heart of Chicago tap dancer Jumaane Taylor’s first evening-length effort. Called “Supreme Love,” the dance is a heartfelt love song to a reimagined rendition of Coltrane’s genre-defining album, “A Love Supreme.”  As an online answer to COVID-19, the first movement of this stage work, premiered in 2015, gets its international premiere at the 22nd (Digital) JOMBA! Contemporary Dance Experience. The screening is part of the festival finale, Dance on Screen (USA), on Sept. 6.

“Supreme Love” opens with the wick of a drum roll alighting an explosion of sound as four musicians wind strings of melody and percussion around each other. A white light from two blazingly opaque portals bring four meditative bodies into focus. The dancers sit cross-legged on a worn plywood floor with four pairs of tap shoes beside each of them. Entranced, those in a circle on the ground are adorned not in ceremonial robes, but loose street clothes. They are everymen, blue collar and eerily pious. As the music fades into a dreamlike ambience, the dancers wipe the dust from their feet before putting on their tap shoes, treated here as fragile, sacred objects. One by one, the figures languidly rise and sleepily drag their feet towards another sacred object of power, an old tree stump. Each figure in his or her own time capitulates over the stump and when satisfied, turns back around and once again lumbers back from whence they came. A union of musicians interrupt their journey, drawing the bodies back to face towards the stump. With heavy heads and heavy arms, they slowly begin to awake.

In an interview, Taylor talked about the meaning behind this scene:

“It’s at the birth. It’s at the beginning. We’re finding out what love is, and that’s the love of tap dancing, the love of music.  We’re touching the most natural thing that appears when we awaken and we do our dance for being born, for existing at all. That is what that first part [of ‘Supreme Love’] is: acknowledging the ability to live, the ability to say thank you, the ability to do this gift.”

The first movement, “Acknowledgement,” begins with an awakening and rebirth that parallels John Coltrane’s mentality at the time of the album’s composition. “A Love Supreme” was a turning point for Coltrane, whose alcohol and heroin abuse threatened to end his career early.  With the help of friends, family and religion, Coltrane kicked the habit and came back stronger than ever, producing what is considered to be one of the most important jazz albums of all time. Taylor interprets Coltrane’s epiphany and rebirth as a literal “from the ground up” story, beginning with the four acolytes in the film sitting on the floor in a circle, replanting themselves so that they can be better than they were before.

Taylor does not want his work to be about struggle and pain. Rather he sees the dance as an expression of love and absolution.

“I really didn’t want to focus on the struggle and heartache that comes with the American history, from slavery ‘til now. I feel like that’s what Noise/Funk was good for. I want it to be a representation of the ‘now’ … to understand some type of love for the human experience.  Hopefully at the end we empty out any type of racism, or any type of hate or disbelief. This is an act of love. We are trying to express our gratefulness for freedom to the fullest extent.”

The dancers’ focus slants always towards the sacred stump, which like their shoes is another totem of the tap world. The stump references the famous good-luck “Tree Of Hope'' that lived between Connie’s Inn and the Lafyette Theatre in Harlem, New York City, during the 1920s and ‘30s. Today, a “Tree of Hope” stump sits backstage at the Apollo Theater as a good luck charm for those who dare test their talent on that hallowed stage.

The focus of the viewer is naturally drawn to the dancers’ feet, whose heels increasingly thump to life with an ebbing and flowing devotional in the form of the “paddle and roll,” accompanied by the famously accessible down/up, down/up motif from the bass—a-looove-su-preme, a-looove-su-preme…

The energy ramps up unexpectedly as the four dancers, standing in the center, break free of their trance and get to the business of tap dance. Their bodies expand and contract as is needed to produce the steps. Petite Donnetta “Lilbit” Jackson exhibits the tightest concentrated control. Starinah “Star” Dixon conducts the rhythm as much in her arms as playing it with her feet. Tall and lanky Ian Berg literally punches the beats into existence with his fists. And Taylor, who also performs in the work, cocks his head to hear the music produced by the octet of musicians and dancers.

Tap dance and jazz music have always gone hand-in-hand, both considered Negro song and dance forms until white practitioners wanted to do it, too. Then, it became America’s song and dance. Duke Ellington, Count Basie, Cab Calloway—they all traveled with tap dancers (Bunny Briggs, Buster Brown and Jimmy Slyde, respectively).  To imagine tap dance as another instrument among the jazz quartet is not a stretch—a tragedy for its not being included more.  Taylor merely carries on a long tradition that many don’t know ever existed, a tradition that extends to tap dance’s perceived origins in Africa

The exact origins of tap dance are hotly debated, but Taylor finds confirmation of tap’s roots in African music and dance:

“There are all these different debates about where this dance originates from, or how it’s connected to this and that. Simply listening to African music—African drums especially—and looking at African dancing, you can see how much tap dance comes from that particular energy or aesthetic.”

Taylor went on to elaborate on tap dance’s connection to its West African roots.

The trudge of four devout bodies back and forth, pendulating between music and God, tells the story of Coltrane’s rebirth and tap dance’s revival.  Prowess can take you so far, but it’s that connection to something deeper that has allowed tap and ‘Trane to survive.

"Supreme Love" can be viewed at 12:00 p.m. CST Sept. 6 as part of USA Dance on Screen, a platform of American dance films presented as part of the JOMBA! Contemporary Dance Experience. View the performance by visiting https://jomba.ukzn.ac.za/whats-on-today/ 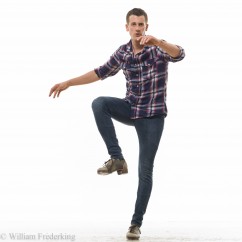 Fellow Tristan Bruns is a tap dancer from Chicago.  Tristan is a professional company member of M.A.D.D. Rhythms, and was a founding member of the Chicago Human Rhythm Project's resident ensemble,  BAM!.  Tristan is the Director of Tapman Productions, LLC, a multi-genre dance production company and tap dance floor rental service.  Besides tap dancing, Tristan has been a featured columnist at DanceAdvantage.net and currently pens the blog The Tap Book at TapmanProductions.com.  Tristan holds a BA in Music from Columbia College Chicago.