Introdans (Arnhem, The Netherlands), a tech-enthusiastic Dutch dance company, screened four performances Friday—“Wereldleiders,” “Face Machine” and “Blue Journey” by choreographer David Middendorp, and “Swingle Sisters” by Alexander Ekman—as part of the Digital JOMBA! Legacy series. Middendorp’s three pieces explore the relationship between 2-D graphics and 3-D lived experiences by choreographing the interplay between animation and physical performance. His works highlight the ever-narrowing gap between virtual and physical reality in playful, ridiculous and unsettling ways.  The choreography of all four Introdans pieces managed to balance quirk and innovation with crowd-pleasing entertainment to great effect.

Middendorp’s first piece, “Wereldleiders (World Leaders),” opens on two muscular white male dancers in torn up business suits facing off against each other in various power poses, reminiscent of debating politicians. The dancers’ moving forms layer onto images of writhing bodies on a screen behind them, creating a new visual environment that blends the physical realm of dance with animations by Dutch Tilt Studios and Middendorp. The performers gesticulate, oblivious to the growing pile of bodies depicted behind them. In this way, Middendorp uses animations to make a dark joke about the futility and callousness of political theater amidst real human suffering.

In “Face Machine” and “Blue Journey” Middendorp continues to successfully blend technology and dance by facilitating interactions between dancers and their projections. “Face Machine,” shows five dancers rotating beneath a camera onstage, each one taking a turn making facial expressions in a close-up shot displayed at the back of the stage. When not in the hot seat, the other dancers react with curiosity and pleasure—sometimes annoyance—to these large selfie-like images. This piece offers a collection of whimsical exchanges between the so-called “Face Machine” and the performers, including moments when the face licks, spits at and blows on the dancers. Similarly, in “Blue Journey,” performers dance alongside their digital counterparts—silhouettes that appear on an upstage screen. In one moment, a silhouette clones itself, invoking a Duchamp painting, only to suddenly dissolve into smoke. The playfulness of “Blue Journey” was tinged with a sense of bittersweet nostalgia reminiscent of Peter Pan chasing after his shadow.

The final piece, “Swingle Sisters,” choreographed by Alexander Ekman, opens on three white female dancers wearing long-sleeved black leotards and stoic facial expressions as they cough vehemently and on beat for several eight counts. The dancers swivel their heads like sickly, emphatic birds and shuffle their feet underneath a table draped in a red velvet cloth, gliding it across the stage. The performance reaches strange new heights as one dancer begins smashing eggs on her face and knees, clear yoke oozing down her body, then slowly douses herself in a gallon of milk. Introdans artistic director Roel Voorintholt jokingly called “Swingle Sisters” the “corona ballet” in his pre-show remarks in reference to the infamous coughing, despite its 2015 premier. During a pandemic, the choreography’s emphasis on dark humor and body horror takes on a new resonance. 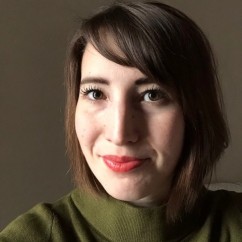 Fellow Jean Osberger is the assistant director for corporate, foundation, government, & civic relations at the School of the Art Institute of Chicago (SAIC) and a recent graduate of SAIC’s M.A. in arts administration and policy. Her professional work focuses on grant writing, collaborating with community partners, donor stewardship, and programming for events including the annual Citizen Artist Forum. As an arts administrator and a dancer, Jean values the role art can play as a vehicle for community empowerment and the importance of embodied knowledge in everyday life.